Within half an hour I was transformed from a demented cripple into a normal person ... 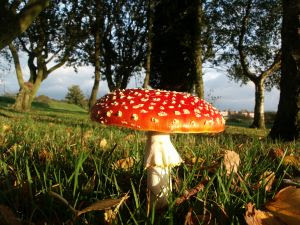 From what I understand, and what my LLMD (Lyme Literate Medical Doctor) has told me, the muscarine in the fly agaric mushroom is a neuro-transmitter. It forces open the muscarinic receptors, a form of acetylcholine receptor that plays a crucial part in the relay of electrical signals around the body. It is possible that these muscarinic receptors have become clogged with the neurotoxins created by the Borrelia bacterial infection. It's possible that neurotoxins from other infections could also have this effect.

Lymphocytes have muscarinic receptors too, so with muscarine they're able to do their jobs better, boosting immune defence. Fly agaric mushrooms also contain other chemicals with antimicrobial properties. The mycelium that creates them is like a plug-in immune system for the tree they attach to. It is believed that people can benefit from this antimicrobial activity also.

The raw, fresh mushroom contains ibotenic acid, which can give you an upset stomach. It's necessary to dry or cook the mushroom, which turns the ibotenic acid into muscimol, which won't upset your stomach. The small amount of muscimol may lift your mood a little.

The fly agaric mushroom is the classic toadstool of fairytale, a red mushroom with white spots. It is found throughout Britain, the season stretching roughly from late August to early December, under birch, oak or pine trees. It's unlikely to be confused with any other mushroom. It's best to take good fresh specimens, with either an open or closed cap.

Pick the whole mushroom. Take a non-metallic tool such as a clean wooden spoon to dig an inch or so around the base of the stalk. Sometimes it's possible to simply hold the stalk as low as possible and gently jiggle and pull it loose.

The mushrooms are the fruiting bodies of an underground mycelium in symbiotic relationship with the host tree. You can sustainably collect all fly agaric mushrooms you find, though it's best to take only the good fresh ones for medicinal use.

Wrap the mushroom in a large leaf, eg a dock leaf. Newspaper will stick to the caps. 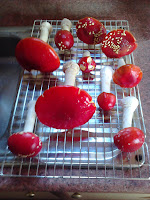 Wash the mushroom throughly. It doesn't matter if the white spots wash off. Try not to get the gills wet though, as they take a long time to dry again.

Cut out any bad bits or bits with wormholes in. You can use these to spread the fly agaric spore to another birch, oak or pine.

There are then several ways to prepare and preserve the mushroom:

Dosage is an individual matter, varying not only from person to person, but also for the same person at different times, depending on their current neurotoxin load. The amount of muscarine (active acetylcholine chemical) present in the mushroom also varies, from one mushroom to another, and even within the same mushroom. It's best to take a small amount at a time and monitor effects.

Fly agaric can be fatal, though a fatal dose is in the region of 20-30 mushrooms at a time.

Large amounts of fly agaric can lead to a sense of unreality, like Alice in Wonderland. If this happens to you, don't take any mushroom for a day or two.

Muscarine is contraindicated in patients with diseases that make them susceptible to parasympathetic stimulation, patients who have asthma or COPD or patients who have peptic ulcer disease. Also patients with an obstruction in the gastrointestinal or urinary tract are not prescribed muscarine because it will aggravate the obstruction, causing pressure to build up that may lead to perforation.

The antidote for fly agaric mushroom is milk thistle. The antidote to muscarine is atropine.

I'd spent the whole summer lying on my boat, feeling like death, mostly too crippled to do anything, mostly too demented to see anyone.

With no memory of the past and no cognition to imagine the future, I was very much in the here and now. My butterfly brain kept settling on the colour red. Somehow this translated into me biting into a fly agaric mushroom for the first time. Just one small bite.

It tasted great. And within half an hour I had a surge of energy. It seemed as if I was doing things almost before the thought of doing them had even occurred. The headfog was clearing. It was like waking from an enchantment. It wasn't in any way "trippy" - I was simply returned to normality.

There were only a couple of weeks left until the fly agaric season was over. Every day I took a bite of mushroom and went out collecting more. Some I dried, some I froze, some I turned into tincture.

It was immediately obvious I was onto something huge, and I started writing the blog flyagarictincture.blogspot.co.uk. Prior to eating the mushroom, I couldn't read or write anything. I just didn't have the requisite cognition or attention.

There didn't seem to be any information on the web about this. All I could find was from helium.com

Fly agaric is still used in Siberia and Russia especially by elder people to reduce fatigue, to give more strength and to raise the spirit.

Nearly a year on and I'm still on the fly agaric pretty much every day. Just small amounts. Despite my experiments with fly agaric tincture, I now think that eating a little of the mushroom every day works best, fresh, frozen or dried. It is impossible to determine a definitive dose, as the amount of muscarine will vary from one mushroom to another. But I generally take an amount the size of a little finger bone between zero and three times a day, depending on whether I think I need it or not.

For a few months whilst on the fly agaric, I had blood tests to check my liver function. It was always fine.